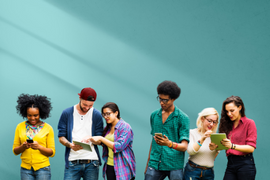 Are we finally fed up with Twitter feuds and Instagram celebrities? Or finding ourselves stuck in a social media hole at 1am? It seems like the world is getting tired of the constant onslaught of Facebook updates and inane Snapchat stories and is ready to step away from seeing the world through a screen.

Or at least, that’s what the latest media buzzword would suggest.

You may have heard of the ‘social media’ cleanse, a fancy term for giving up social media for a period of time in the name of mental wellbeing.

But is too much social media even bad for you?

That’s what ‘Nosedive,’ the first episode of the new season of ‘Black Mirror’ proposes. It takes place in a dystopian society where social media obsession has become a part of every day life, where you can instantly ‘rate’ interactions with strangers on the street by pointing your phone at them. The high scorers are given exclusive access to a higher quality of life, whereas the low scorers receive bad housing, low employability and social snobbery. What results is a desperate scramble to curate a perfect life on social media and get validation online.

“Everybody is chasing [a] sort of perfect, Instagrammable moment in every interaction,” writer, Michael Schur told GQ magazine.

The scary thing about ‘Nosedive’ is that it doesn’t seem all that far from our current reality. It’s no wonder the ‘social media cleanse’ is becoming a hit with celebrities and normal folk alike.

We investigated some of the ways in which social media does affect your health:

Studies have shown that social media is addictive. Researchers in Norway have even created a scale to measure addiction to Facebook. Participants are asked to rate the following statements against the following 5 responses: (1) Very rarely, (2) Rarely, (3) Sometimes, (4) Often, and (5) Very often. Scoring “often” or “very often” on at least four of the six items suggests you’re addicted to Facebook – but this could apply to any social media channel. Take the test yourself, if you dare.

Spending time in front of a screen is bad for you

Really bad for you. Not only does spending too much time looking at a screen stop you from sleeping properly, it also causes eye strain and can affect cognitive performance and increase cravings by shrinking the grey matter in your brain and reducing the effectiveness of the white matter which gives your brain the ability to send messages.

It causes low self-esteem and even anxiety

Measuring your self-worth by ‘likes’ from strangers can never lead to anything good. Social media channels like Instagram can paint an unrealistic picture of people’s lives – posed, edited, airbrushed and wholly unattainable in real life.

“Soaring numbers of young women are suffering mental health problems and self-harm as a “selfie culture” heaps pressures on girls,” one study found.

A German study also indicated that “passive following” on Facebook “triggers feelings of envy and resentment in many users, with holiday snaps being the worst offenders.”

The German study also found that 1 in 3 people felt lonely, frustrated or angry after spending time on Facebook, often due to perceived inadequacies when comparing themselves to friends.

This seems slightly counter-productive to social media channels designed to connect people around the world at the click of a button. But how many times have you found yourself ignoring normal everyday interactions with the people around you in favour of your smartphone?

“When people move from, “I have a feeling, I want to make a call” to “I want to have a feeling, I need to send a text,” something unfortunate happens to their relations with others. They start to need other people to feel validated and they cannot approach others as full, individual, differentiated people,” suggests Sherry Turkle, a Social Psychologist.

Start your own social media cleanse

Think it might be time to limit your online time? Here’s a few suggestions.