Don’t be scared of languages 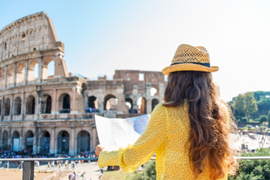 Us Brits have it easy. Almost 400 million people speak English as their first language, with over 1 billion speaking it as a second language.

Yet we shouldn’t rest on our laurels.

Being multilingual comes with huge benefits, especially in business. A language can add between 10% and 15% to your wage, according to recruitment agency Euro London. English is actually the third most-spoken language in the world, with Mandarin and Spanish coming out top.

Not only this, but languages are infinitely useful for travelling and can also boost your brain function, memory and decision-making ability.

Worried about your ability to learn a language?

“If you’ve ever doubted whether you’re a good language learner, then bear in mind that you’ve already learned one language very well indeed – your first,” argues Robert William McCaul for the British Council.

It’s also easier than you think for English native speakers to learn certain languages. English comes from West Germanic, Norman French and Latin, so actually shares a lot in common with many other languages. This means you’re not starting from scratch – you’re actually already familiar with the alphabets, sentence structure, vocabulary and pronunciation of many other languages.

Here’s the easiest languages to learn for English-speakers, according to The Telegraph.

So how do you go about learning a language?

Translation site Babbel.com have shared tips from someone who can speak nine different languages. If anyone can teach you how to become multilingual, it’s this guy.

Have a good reason to do it, and use this as your motivation

Don’t do it alone

Join a language class, find a language-learning buddy and even talk to yourself. Having other people around you pushes you to work harder whether it be from support or rivalry. Talking to yourself also gives you more practice and keeps things fresh in your mind. Language apps are helpful, but nothing beats learning in a real-world environment. Check out the language short-courses at Lincoln, Newark and Gainsborough College.

Think about how you will use the language in an everyday setting and focus on that part of the language, whether it be having general conversations, using it for business or writing love songs.

Be creative with the language – try writing a short story, exchanging funny emails with your language-learning buddies or just keep talking to yourself. It will expand your vocabulary and make you feel less afraid of making mistakes.

Don’t be scared to try. Making mistakes is the only way to improve so leave your comfort zone as much as possible and talk to strangers. Don’t worry too much about grammar and pronunciation, it’s important to just get comfortable.

Expose yourself to the language

The more you hear other people talk and pronounce the language, the easier it will be for you.

English not your first language? Enrol on an ESOL course (English for Speakers of Other Languages).